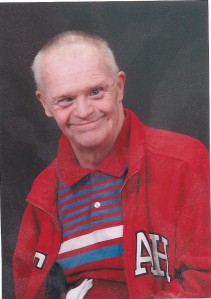 Ricky Lee Cromar, who is my older brother and the second of seven kids, was born May 17, 1949, with down syndrome and autism.  It was my parent’s choice to keep and raise him rather than put him in an institution, which was customary at that time.

There arose many challenges, especially in the beginning. Ricky was incredibly stubborn as a young child, so to teach him anything was very difficult.  It took my dad, until he was four years old, to get him to feed himself. It wasn’t that he couldn’t do it, he just wouldn’t.  Even simple things like asking Ricky to go wash his hands, he would absolutely refuse.  My mom learned early on that if she went up to Ricky and gave him a hug and told him that she loved him, and then asked him to do things, he would do them without any resistance.

My parents insisted that Ricky be treated like the rest of us kids.  If we had to do chores, so did he. If we did dishes, so did he.  It took longer to teach him, but when he learned his responsibilities, he was very consistent and willing to do them.

We were also taught, as kids, not to leave him out of our games that we would play.  We were to include him and patiently teach him so he could play with us.  Ricky’s mental capacity never surpassed a three or four year old, he was full of love and always tried to do his best at whatever he did. He loved to make others happy and he was such a blessing to have him in our home.

When my parents passed away, Ricky came to live with my husband and me and our three kids. He had stayed with us many times, so there wasn’t much of an adjustment.  While he was with us, he had the opportunity to overcome a lot of his fears.  One of which was flying on an airplane. In 2003, my husband, Layne and I were asked to go to Hawaii for a couple of years and start up a new warehouse for the company we were working for. Knowing of Ricky’s fear and stubbornness I asked George, our oldest son, go to the airport with me to help me out with Ricky since Layne had to fly out a week earlier. George and I were able to get Ricky up to the gate but once there, he absolutely refused to go another step.  After trying everything we could, I said a silent prayer. Just then one of the airline employees came up to Ricky with a wheelchair and asked him if he would like to go for a fun ride. He smiled and sat down in the wheelchair and he pushed him on to the plane.

Over time, Ricky learned to trust me. And with that trust, Layne and I were able to get Ricky to go on boats and trains and to go to new places. His fears started to diminish and he enjoyed more things.

When we moved back from Hawaii, Ricky’s health was slowly starting to decline, so I started taking him to work with me.  He had his own desk in my office and the company would pay him to shred papers and other small jobs.  Everyone knew him and loved him and they would always walk away with a smile on their face after they visited with him.  Ricky had the ability to touch the lives of other people and make them feel happier.

His health continued to decline and Ricky faced many new fears without much resistance. He started having seizures and other problems that he couldn’t understand.  But he seemed to have a relationship with God that he could understand.  There wasn’t anything that I could do or say that would comfort him, but he was indeed, receiving peace and comfort and was able to go through whatever came his way.

Ricky passed away October 9, 2011, and just before his passing, he was extremely happy and excited about something.  The spirit that he brought into our home was amazing and it was quite an adjustment not to have him with us anymore. Even though there were many trials and sacrifices made, he was never, ever a burden and the blessings he brought into our home far out-weighed whatever trials there were. We feel very lucky to have had him in our lives and the lessons we learned from him will always be with us.

Thank you Judy for sharing your story. What a wonderful sister you are and brother-in-law Layne is. Ricky was a lucky man to have been surrounded by your family’s love. Also, you were a great next door neighbor to us for sixteen years when we lived in Sandy, UT. You and Layne have the biggest hearts and we love you both. We appreciate your example and help with our two kids.They always loved being at your house.