Everything I learned about being a friend I learned from my younger brother, Steve. He’s my first and dearest friend. We’re only twenty-two months apart, so honestly, I don’t remember life without him. I can’t imagine we’d be closer if we were twins; we even finish one another’s sentences.

As young children we shared a bedroom. I don’t remember detesting naptime or bedtime because as soon as the bedroom door closed, it became a magical place. The challenge was to stay quiet enough, so Mom or Dad wouldn’t hear us. We’d climb on top of the dresser that separated our twin beds and drive all over the city making our milk or mail deliveries in our pretend vehicle to all our pretend neighbors and friends. Eventually we would hear footsteps walking towards our bedroom. We could drop into bed with the covers pulled up and act asleep faster than lightning. I don’t remember ever getting caught, but we must have because there came a day when Mom said we needed separate rooms. So Steve was moved downstairs and paired up with our brother Don. The bedtime amusement ended until a third bedroom, bath and family room were completed in the basement. At age nine, I anxiously moved downstairs with my three brothers and my upstairs bedroom was remodeled to be our dining room.

Mick and Don are seven and four years older than I, so when my bedroom was downstairs they were usually off doing whatever teenagers do, leaving the annoying youngest two siblings to entertain one another. When our parents, older siblings or sometimes both were watching T.V. after our bedtime, I would see Steve poking his head out of the bedroom doorway watching the show. Making silly faces we would try to get the other to laugh and when we did we would quickly dart back to bed before we were caught. When the threat was gone, we’d meet again in our separate doorways for a repeat. It’s great being the youngest kids in the family because our first three siblings either broke Mom and Dad in or worn them out which enabled us to get away with a lot more monkey business.

I still feel guilty about the time I let Steve take the blame for picking at a cake Mom made for a party. She thought the finger dips in the icing ruined it and was very upset. I didn’t dare say a word as she scolded Steve for messing up her beautiful dessert. But later I tried to redeem myself as a “good sister and friend” by standing up for Steve when two boys my age were bullying him on our walk home from school. They were mean, but I think I scared them off or maybe it was the talk I had with their moms. I don’t know for sure what took care of them, but I like to think it was my doing.

I was always proud to see Steve in the halls at school. He had many friends and especially the girls were crazy about him, being the handsome, kind and thoughtful teenager that he was. He was also a good dancer and was kept busy on the dance floor, but he always managed to save a dance with me at the stomps. 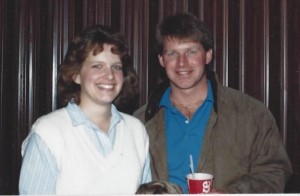 n high school we were the only two kids left at home and we had the basement all to ourselves. Late at night we enjoyed talking about the daily events which always brought some laughter and our parents stomping on their upstairs bedroom floor and a shout down the heater vent: “Be quiet! It’s late!” So we’d quiet down for a while but before we realized our voices were getting too loud again, we’d hear another stomp and yell down the heater vent. “Go to bed!”

During my single apartment life, along with community college and work, I enjoyed having Steve over for dinner and a visit to catch up on life’s happenings. When I married Mark, Steve became the brother Mark never had. When Christopher and Katie joined our family, Steve was one of the first to come to the hospital and welcome them into our family. He has loved and supported them in all their activities throughout their lives.

Steve and I also have a working relationship. After high school graduation Steve and his friend Rick started a property management business. As the business grew, he asked me to help with the accounting part-time, but with the success of the company it soon became a full-time job for me. It’s been rewarding and pleasurable for nearly thirty years as I witness his generous, thoughtful and caring ways applied in the business world. He makes time for whoever needs him. He appears calm, cool and collected under stressful times. He’s tolerant, personable and genuinely interested in every person he meets.

In 1996 Steve gave me a small package and card which I will never forget. I wept as I read the words of appreciation for the past ten years of service with Earthwork Property. I opened the gift with excitement thinking it must be some special memento, but inside was shredded paper with a key and note attached saying, “Hope this will make all your errands more enjoyable.” I was stunned to say the least and asked him what this was to. He said, “Let’s go take a look”. Unprepared for the situation, I didn’t know what I should think or feel as I followed him out to the driveway. Parked there was a beautiful new 1997 Grand Prix Pontiac. I had been driving an old 1979 Chevy since our car accident in 1991 which total our Hyundai. Never did I dream I’d have a brand new car and this one was the prettiest one on the road.

Steve has perfect communication skills. He has a way of sharing insights, opinions and advice without being pushy or offensive. He listens as if he has all the time in the world. He is compassionate and always willing to do whatever is needed. He has been there to help and support in many of my home and yard projects. We’ve spent late nights painting a basement or a room and once even the whole house! He helps me with little projects too like hanging curtains, pictures or even just cleaning the house.

Fifty-three years of good memories, lots of laughter and tears! From my childhood to present, Steve has been a great playmate, helpmate and boss. I think he knows me better than anyone else and still loves me. I’ll forever be grateful for the example and influence he’s had on my life and for the wonderful friend that he is.

Happy Birthday, Steve! I love and appreciate you!

1 thought on “Siblings by Chance, Friends by Choice”