Pregnancy has always been a difficult journey for me and my last pregnancy was no exception. I was high risk from the very start. Because of complications in past pregnancies, I was diagnosed with incompetent cervix. At nine weeks I was put on modified bed rest at home because I started bleeding. The doctors didn’t know the cause of it and said it wasn’t related to the incompetent cervix. At twelve weeks I had a planned surgical procedure done called a cerclage to help me stay pregnant. The cerclage failed at 21 weeks, causing more bleeding and a tear in my cervix. I had an emergency surgery, the second cerclage placed and the tear repaired. I was then put on strict bed rest at home. I was only allowed to get up to use the bathroom, shower, and get a quick bite to eat and had to be laying down the rest of the time. After a week of strict bed rest, I started hemorrhaging and both cerclages had to be removed because mine and our baby girl’s life were threatened. I was told I was most likely going into labor and there wasn’t anything that could be done to stop it. The baby wasn’t developed enough to live if she was born.  I was admitted to the hospital in hopes I could stay pregnant a week or two longer so the baby would have a chance of survival. The doctors didn’t think I would make it another day, let alone the 2 more weeks we needed to reach viability. We would do anything to try to keep me pregnant just a few weeks longer. We had already said hello and goodbye to our precious twin boys the year before. We did not want to give up on our daughter and knew being in the hospital was the best place for me. I was told I would remain in the hospital until the baby was born. I ended up staying in the hospital for almost 9 weeks and was able to go home on strict bed rest for the remainder of my pregnancy. The hard work paid off and miraculously our Ariana was born just 3 weeks early at 37 weeks and is healthy and doing well.

Being on bed rest is taxing in various ways. I wasn’t able to care for myself, or our 3 year old son, Liam, or our house, yard, six chickens and our dog, Harley. I had to completely rely on my husband, David, and other people to do everything which I had previously done for myself. It was difficult emotionally and mentally to let go and let things be done in a different way than I would have done them or to see things not get done at all. It was awkward to ask for help and feel like I was imposing or asking too much of those who had already done so much. I missed getting out and seeing my family, friends and neighbors. I felt isolated and lonely. It was challenging to express how grateful I was for all those who helped my family. I felt guilty for not doing more to make things easier on those who helped, even though I did my best with what I could at the time. 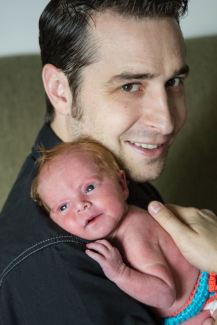 Being in the hospital for so long was a whole new level of taxing. Everything was taken from me— my independence, privacy, familiar people, food and home. I missed being on my own schedule and not having complete control over my environment.  It was tough to watch Liam struggle with his tender, immature emotions as he tried to process the situation and not know how to help him or be there for him like I wanted to be. It was heartbreaking to watch David struggle with all the new roles he had and not being able to help ease his burdens as well as feeling like a source of stress for him. It was hard to feel so helpless.

People have asked me how I was able to be on bed rest for so long, especially in the hospital with a child at home and a husband who works full time. I couldn’t have done it alone. We had family members who took over childcare and neighbors and friends from our church who watched after our house and pets.  When my cousin, Lisa, found out about my situation, she came right over with her calendar and asked what days she could take Liam. She didn’t casually say, “Let me know what I can do to help.” She proactively offered specific help and then followed through by watching him many times. I also knew that I could call my sister-in-law, Krista, and she would take him any time I asked. My mom was the one we relied on the most. She did her best to watch Liam as often as she could and be the one consistent childcare provider. She worked at a school so it was tricky finding people to watch him on the days she had to work. Once school was out for the summer, she was the one who had him every day. She sacrificed so much to be there for him so I could focus on my pregnancy. She did not return to work after the summer so that she could continue to care Liam and eventually me when I came home from the hospital on bed rest. I will never be able to repay her for all that she has done for our family. 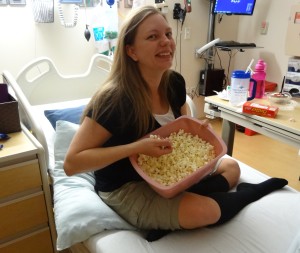 Other people helped by being there for me on an emotional and social level. Friends brought me books and movies, came to visit and even had a movie and popcorn night in the hospital. Some brought me snacks and meals, which were also appreciated. Many people from church brought us dinner for months while I was on bed rest at home. It was a huge help. I wasn’t shy about accepting food and even now I miss the good meals that were brought and even more, the people that brought it. I loved seeing my friends and neighbors because I wasn’t able to get out, so it was nice they came to me.  It helped to have visitors or even just calls or texts from people letting me know that they were thinking of me. I may not have always said thank you, but I thought it. The help never went unnoticed and was always appreciated.

Thank you Ann for sharing your story of endurance, persistence, fortitude, appreciation, and hope. I’m thrilled you have the blessing of your son and daughter—a great reward for your sacrifice.

3 thoughts on “The Receiving End of Caregiving”