With my collarbone healed and my right arm free from the sling, I started writing daily notes about Mark’s progress. I recorded his red and white cell counts, temperature, heart rate and respiratory pressure support. I did this so I could recognize the improvements no matter how small they might be. It helped me stay focused on just parts of the recovery instead of thinking about everything Mark needed to overcome.

Mark’s white cell count was high and since the increase indicates an infection, they did a body scan. Mark’s liver was abnormal. With his weakened immune system, they treated the liver infection aggressively with a powerful intravenous anti-biotic because they were worried the infection would spread quickly to other organs, causing death. Within a week his white cell count went from 50,000 down to 11,000, which was an answer to our prayers. He was schedule be on this medication for two weeks with the goal range of 5,000 –10,000. In my mind he had almost reached the elevated end of the goal range.

With high blood sugar levels, Mark was now on insulin and with a large blood clot in his right leg, he was getting heparin. He was now in a floatation bed to help with the blood clot problem. There were so many health concerns that at times I thought I’d lose my mind from the anxiety. I found it helpful to write down the worries and the normal or goal range for his white and red cell counts, heart rate, temperature and the respiratory pressure support. I tracked the numbers daily. I recorded when they did a test and then the test results. Gathering all the information I could helped me understand the process and what was happening with Mark’s body. I recognized and celebrated every little miracle that happened.

Mark’s low red cell count was a cause for concern because it could indicate internal bleeding, bone marrow failure or kidney disease. Within this same week his red cell count increased from 3.3 to 3.8 million with the goal range of 4.0-4.5. I saw the numbers as a great improvement.

I also noted on one day I saw Mark move his finger, on another he held his head up slightly to cough and another time he yawn. I rejoiced in every movement and recorded them in my journal. Unfortunately, Mark wouldn’t do these things when the doctors, nurses or therapist were there so my joy had no merit by their standards.

Without meaning to, I annoyed the doctors and nurses with my records and positive notations. It became a daily routine when the doctor walked into Mark’s room with the hospital records and stated, “No change.” I would then read from my records and report what I had witnessed. The doctor then left the room as frustrated with me as I was with him. We definitely did not see Mark’s progress in the same way. He never specifically said, but it was written all over the doctors face, who was I? A young 32 year-old spouse, uneducated in neurology, who had the audacity to question and challenge his words. I was truly grateful for his knowledge and skills which saved my husband’s life, but I didn’t appreciate his bedside manners. My observations were not taken seriously. The doctor was the medical professional, reading and understanding what the results of many tests were telling him. However, I knew Mark and was the one spending many hours with him day in and day out. I felt his spirit and knew he felt mine. It was so frustrating that what I witnessed had no value with the professional caregivers. I wanted us to be on the same team, working together in Mark’s behalf, but instead it felt like we were on opposing teams. There were a few days I was tempted to throw my shoe at the doctor as he walked out the door. Equally frustrated at me, I’m sure he was tempted to stitch my lips together.

The day after my 32nd birthday, they did a Brain stem Auditory Evoked Response (BAER) test which measures how the brain processes the sounds you hear. The BAER test records brainwaves in response to clicks or other audio tones that are played. The test can help to diagnose hearing loss and nervous system disorders in people who are not able to participate in a standard hearing test. While Mark was lying in bed, a technician placed small electrodes (sticky patches with wires attached) on Mark’s scalp and earlobes. The electrodes were connected to a machine which recorded his brain activity while he heard a series of clicks and tones played through earphones. 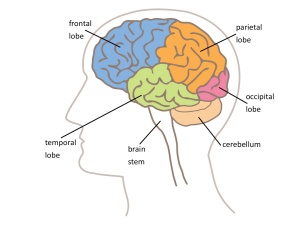 I was elated as I watched his brainwaves being recorded in black on the continuously fed white sheets of paper. He was reacting to the noise he heard, which confirmed my belief that he could hear and his brain was processing it. My spirit jumped for joy with each spike his brain activity made every time he heard one of the clicking sounds or other tones. The printout of the test results was something tangible which showed the spikes. I didn’t know what a normal or abnormal test looked like, but the report appeared wonderful to me. I was excited to hear what the doctor would say. I was positive it would be good news.

The next day the doctor told me that the test indicated significant damage to the brain stem, which is responsible for breathing, sleep patterns, hunger and thirst, blood pressure, heart rhythms, and body temperature. It regulates the central nervous system. “Mark has bruising and injury throughout all parts of his brain, but the most severe damage is to the brain stem. When you go to sleep, it’s the part that wakes you up. With the amount of damage he has, I don’t expect he can ever wake up.”

A chill ran up my spine while a flashback flooded my mind. After I gave birth to Katie, I hemorrhaged and had to have an emergency surgery. When I was coming out of my sedated state, I heard doctors talking about all the blood I had lost. I felt one of them pull down the bottom part of my eyelid as he commented on how white the area was, which should be pink in color. Inside I panicked, but could not make my body move. I worried they thought I was dead and I felt helpless to show or tell them otherwise.

With this doctor’s words, I felt Mark’s terror. He, too, was trapped in a body unable to respond. I followed the doctor as he left Mark’s room. “Please don’t ever give reports like that at his bedside again. I prefer we meet in the conference room to have these discussions. After all, the BAER test confirms he can hear, right?”

“Yes, he can hear, but I don’t believe he understands a word that’s said. However, if it makes you feel better, we can meet in the conference room from now on.”