by Katie, May 1991. One month after her 7th birthday. A picture of Katie and Christopher. Our cat, Spook in a picture on the wall. She expressed her biggest fear, “I hope you will remember us.”

Mark’s neurologist explained that it’s difficult for any physician to predict the outcome of traumatic brain injury. Along with family members, they have to “wait and see” how the patient progresses. They encouraged me to bring Mark’s favorite music and surround him with familiar people and things.  After meeting each one of the therapists assigned to work with Mark, Mom drove me home.  What a huge difference it made having him only 2.3 miles away. What used to be an hour drive to see Mark now took five minutes. This relieved the pressure of feeling like someone needed to be at the hospital at all times. Knowing I could get there quickly in an emergency lightened the stress. My dad, brothers and brother-in-law would no longer need to take turns spending the night at the hospital. I will be forever grateful for the weeks they did so.

May 1991, Christopher’s drawing of the swing set Mark built for the kids

I picked up the kids from the neighbor’s house and they gathered pictures they had drawn and colored for their Dad over the past seven weeks with get well notes to him. They were excited to decorate his room with them. Christopher put his prized pinewood derby car in a bag, along with the first place trophy he had won the week before. I packed up some family pictures, clothes and dinner for us to eat in Mark’s new hospital room. We were all anxious to be together again as a family and we went there with the intention of making Mark’s hospital room feel like a second home. Our excitement made the memory of their fearful first visit disappear.

At the hospital, the kids helped me tape their pictures on the salmon colored walls and closet door right in front of Mark’s bed. I put framed school pictures of the kids and some family pictures on the shelves above the drawers. We hoped these pictures would be the first thing Mark would see when he opened his eyes. While I placed underwear and socks in the drawers, I encouraged the kids to read to their Dad, which was the nightly routine before the accident. I hung a few pullover shirts and sweat pants in the closet before taking a seat in the room. There was a small, round table with only two chairs in the room. I asked  the nurse if I could bring in one more chair from the recreation room so we could each have one. The three of us sat around the table and we ate our first meal by Mark’s bedside. It felt so good to all be together again and the kids seemed to be happy to see their dad. Christopher pulled the pinewood derby car and trophy from the bag and set it on the night stand next to his dad’s hospital bed. A touch of home was now in the room. We knelt by his bed and said our prayers with him before leaving the hospital. This became our nightly routine which enabled me to sleep better than I had in the previous seven weeks. Having Mark so close to home was indeed a big blessing. 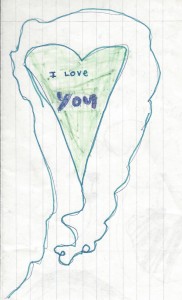 Struggling to understand this complicated condition, I made sure I was at the hospital every morning for Mark’s therapies. On my way, I would drop the kids off at the neighbor’s home or my parents would take them to their home or their cousin’s home to play for the day. Before dinner, I would pick up the kids from wherever they spent the day and we’d take dinner up to the hospital. After our meal together, the kids would play with the other children in the hospital playroom; some of them were patients while a few were visitors. They enjoyed playing and helping the children. The nurses and aides were friendly and caring in helping our children adjust to our new situation. They helped the kids become comfortable in the hospital setting, encouraging them to sit in the wheelchairs and learn to maneuver them. 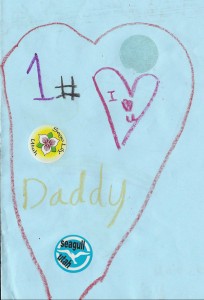 The uncertainty of Mark’s health condition was frightening. Each family member and friend dealt with this crisis in his or her own way. Being responsible for Mark’s well-being,  I felt an urgency to learn everything about his condition so I could make wise choices in his behalf. All the stress and worry made it difficult for me to concentrate and remember explanations given to me. Keeping a journal of events, feelings, concerns, and questions became my way of coping. Overwhelmed, I felt the need to write down my questions and the answers I received from therapists, doctors and nurses. Some of the staff were fine seeing me doing this, while it made others feel guarded and suspicious of my motives. I was constantly taking notes because I didn’t want to forget what I was told and it helped me understand and stay focused on what I felt was most urgent at the time. I was aware of each staff member’s concern, but I just focused on the most critical ones at a time. I believed Mark would come out of his coma once his other injuries and infections healed, but for his therapists, the coma was the most concerning.

After three weeks of the powerful intravenous medication, Amphotericin B, Mark’s red and white cell counts were in the normal range and it was another victory to complete this treatment. The next focus for improvement was weaning Mark off the ventilator. The respiratory therapist came three times daily. I asked and kept record of his respiratory rate and the breaths Mark initiated on his own. I was encouraged every time the preset pressure value was turned down. After one week of weaning him off of the ventilator, the tracheotomy tube was downsized and a smaller tube was inserted. The smaller size allowed for the stoma site to shrink. The next step towards removing the tracheotomy was to plug it. The purpose of this cork was to insure that he was able to clear his own airway effectively without the need for suctioning. After a couple of days without any complications, the doctor ordered the trach tube to be removed. Glorious news, but I was taken by surprise when they pulled the tube out right there in his hospital room and then covered it with dressing and taped it in

place. I was unprepared for the gasping, high-pitched sound he made and I panicked. It was hard to watch him struggle. The respiratory therapist kept a close eye on him and tried to reassure me the hole would close up on its own quickly. Since I had no previous experience with this, I doubted him. It was the first night since Mark had been at Western Rehab that I didn’t dare take the kids to see him nor did I want to leave him. Thankfully, Mom and Dad were able to keep the kids overnight and within twenty-four hours, Mark was breathing more easily all on his own.