I knew family involvement was essential for Mark’s traumatic brain injury recovery. I’d been taught in the classes I attended at McKay Dee Hospital the importance of family and how they can provide an awakening cord. Both of our families had been supportive in every way. Mark’s mother and sisters, Karen and Jerrie, who lived several hundred miles away, sent cards and cassette tapes regularly. I played the tapes for him daily so he could hear their familiar voices. They also sent sounds of the ocean and the music he loved. My family visited Mark often, as well as helped me with the children and my work.  I felt the consistent love and warmth nurtured and helped to heal his body, so why wasn’t it turning the light switch on in Mark’s brain? After ten weeks, why was he still in a coma?

Every morning the nurse’s aide and a therapist would dress Mark, talk to him about the day, unplug the feeding tube, put him in a wheelchair and buckle him in for safety. They treated him as if he was awake, just like our family did. With the new-found freedom from the ventilator, Mark was able to go to the gym for therapy. The occupational and speech therapists worked on stimulating his brain with taste and sounds. I was there every morning and anxious to be involved in his care, not only because I loved him, but because the direction of my own life was affected by his recovery. I hoped the sound of my voice would let him know he was not left in the care of strangers. Most of all I wanted him to feel my love and support, which I hoped would help and encourage him to wake up.

The therapist would ask Mark a question and ask him to blink once for “yes” and twice for “no”. Sometimes his response was correct and other times it wasn’t. There were times when there was no response at all. My heart skipped a beat every time he answered correctly.

During his two hour rest time, I’d run home to get some work done and then run back to Western Rehab for the afternoon therapies. Before dinner, I’d pick up the kids, gather a quick meal and together we’d eat and spend the evening with Mark.The kids enjoyed asking their dad questions and anticipated his response with a blink. They read to him nearly every night before we left for the evening. We learned to be a family in a different setting and in a new, supportive way. Christopher and Katie got comfortable at the hospital with the staff and other patients. They especially liked being with the younger patients in the playroom. They brought sunshine to many people there and it warmed my heart to see them making friends with children overcoming injuries and disabilities.

Now that Mark was closer to home, I was able to get more work done. Eighteen months before the car accident, I signed up as an Avon Representative. I worked hard to reach the “President’s Club” sales level in my first year and earned the top new representative for the district. I enjoyed sales and working one-on-one with people, so I planned to continue as an Avon Representative after we moved. I realized it would be easier for me to reach the president’s level of sales in the district I was already established in, so I ramped up my sales efforts. My goal was to reach President’s Club before the impending move, which I accomplished in four months. I had a large order delivered the day of the accident. The items were not individually bagged for the customers, so the order was not ready for customer delivery. I was planning to do that on Monday and deliver on Tuesday. Even in the crisis of the accident, I didn’t forget about my customers who had become friends. My brother, Don, and his wife offered to take my order slips and call each one to inform them about the accident and uncertainty of the outcome. The delivery date was unknown and they wouldn’t be charged if they wanted to cancel their order. Every customer was concerned and understanding of our situation. One customer, who had been an Avon Representative in the past, offered to bag the orders, deliver the items along with new sale books and collect the money for me. Carla and my mom helped me keep my Avon business going while Mark was in the hospital.

Steve, my youngest brother, was in a partnership of a landscaping and property management company. For years I had done the billing for him. I had completed the billing for April before the accident, but my brother, Mick, helped me with May and June. Having Mark so close to home enabled me to work on these jobs between therapy sessions and in the evening after the kids were in bed.

Getting back into a family and work routine was not easy, but a necessity to keep life moving forward. The uncertainty of Mark’s recovery was worrisome and work was a diversion. Talking to healthy people who were living normal lives brought me hope for a life that seemed so foreign now. 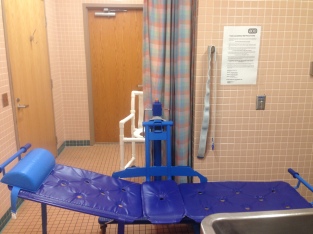 Part of my new routine included helping the nurse’s aide bathe Mark. I wasn’t expected to do this, but I wanted to. It was important to me that he knew I was always close by and involved in every aspect of his care. It took two people to slide him from the hospital bed onto the bath bed, which was on wheels. Mark’s naked body was covered in warm blankets. He was secured to the bed with two safety belts, one around his 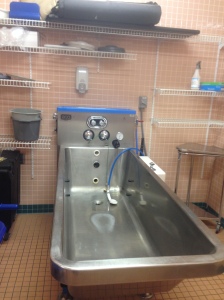 chest and another around his legs, for the ride to the “bath” room. The bed was hoisted into a large bathtub with jets. After nine weeks of sponge baths on his hospital bed, he seemed to enjoy being immersed into the water.

One night in July, after his bath, I cut his hair and shaved his cheeks. We were alone in the bath room. All clean and well-groomed with no place to go except into bed, I stepped back to take one more admiring look at him and said, “I sure do love you!”

Ever so softly, I heard, “Love ya back.” His first words in ten weeks and I wasn’t sure I heard them right.

Tears filled my eyes as I moved closer and cupped his cheeks in my hands, “Did you just say love ya back?”

Exhausted, he closed his eyes. Did I imagine this? No, it was real. I felt his jaw move with my hands and he said it three times, looking straight at me. Without another person in the room, there was no witness. Overjoyed, I wanted to shout to the world that Mark had spoken and recognized me, but I feared they’d doubt me. I didn’t want anyone to squash the joy I was feeling, so I chose not to share this grand news—at least not yet. After helping the aide get Mark back into bed and getting the kids from the playroom, I left the hospital elated, keeping this blessed moment to myself for fear no one would believe me.