A new year brings anticipation for great things. It feels like a breath of fresh air or the warmth of sunshine after cloudy days. It renews our hope and gives us energy for improvement.  It brings motivation and opportunities for our success in many areas. Yet, as I reflect on my goals for 2015 and even 2014, they are so similar because life happens and things don’t usually go as I planned.

I seriously thought about not setting goals for 2016 since I seem to have such a hard time reaching them anyway. In an effort to sort out my feelings concerning this matter, I searched the web for information on New Year’s resolutions. I found many posts addressing why they are important or why they don’t work.

What’s the difference between a resolution and a goal?

A resolution is “a firm decision to do or not to do something or the action of solving a problem,” according to https://www.google.com/?gws_rd=ssl#q=define+resolution

A goal is “the object of a person’s ambition or effort; an aim or desired result,” according to https://www.google.com/?gws_rd=ssl#q=define+goal

As I pondered the two definitions, I thought a New Year’s resolution is like a promise I make with myself. A goal has to be something I truly desire and not just what I think I should be doing. This gave me a new perspective on resolutions and goals and I viewed them as being different rather than similar.

All this contemplating led me to realize what a nerd I am when it comes to goals. Who else thinks about them this long and hard? I not only set yearly goals, but daily, weekly and monthly goals in both my personal and business life. So maybe I don’t need to worry about yearly goals. Could I be setting too many goals?

So much of my life is out of my control. I know that may sound like an excuse, but it’s truly how I feel. My daily direction is mostly determined by Mark’s physical and mental well-being. Our lives are so intertwined with each others by doctor’s appointments, therapy, seizures and other unexpected incidents, which always take precedence over my goals.

I want to keep this website uplifting, so I make an effort to focus on the positive, yet I experience plenty of disappointments, which is a softer way of saying failures. Most of those have to do with me not reaching my goals. 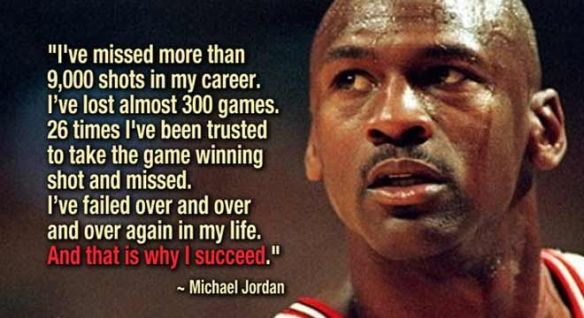 In the business world you may have heard the saying, “fail faster, fail often” in relationship to finding success. I agree with the concept that we can learn more our mistakes and when we recognize them and move on, the failures become stepping stones to our success.

I appreciate Dixie Gillaspie’s words, “the key to success is knowing that failing doesn’t make you a failure.”

So, now I feel better about my 2015 failures and hope I will remember what I learned from them. In fact, I’ve decided my 2016 New Year’s resolution, or promise to myself, is to not feel like a failure when I fail and to recognize and appreciate the lessons learned from my mistakes.

An anonymous person said, “A New Year’s resolution is something that goes in one year and out the other.” Hopefully it won’t be so this year.

As the days come and go, unfortunately so does the excitement and energy which comes from a new year. That’s why I appreciate a new month, a new week and even a new day is refreshing. With so many opportunities to start over, we’re bound to succeed. I truly believe we haven’t failed until we quit trying.