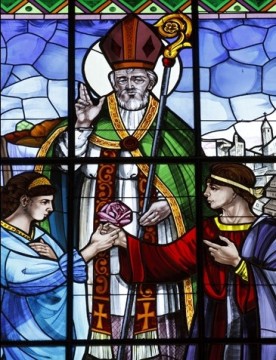 According to Wikipedia and the Catholic Encyclopedia there were at least three early Christian saints by the name of Valentine. It is said that the first St. Valentine, a Roman bishop who lived in the third century, held secret marriage ceremonies for soldiers in opposition to the Roman emperor. Claudius II believed married men were more emotionally attached to their families and didn’t make good soldiers. He prohibited marriage to assure quality soldiers and ordered the execution of St. Valentine on February 14th after he healed one of the soldier’s daughters from blindness and is said to have signed a card to her, “Your Valentine”. His devotion to God and commitment to supporting love and marriage is a remarkable example.

In England, by the eighteenth-century, February 14th evolved into an occasion which lovers expressed their love for each other by presenting flowers, offering sweets, and sending greeting cards known as “valentines”.

For Mark and I, the traditional Valentine’s Day symbol has become three heart-shaped balloons with the sentiment “I love you” written on each one of them. They proclaim our feelings plus remind me of the overpowering relief and joy I felt with Mark’s first words to me after our car accident. 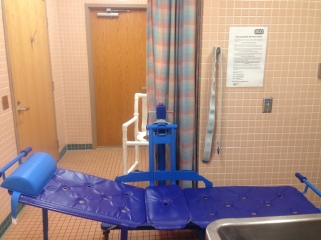 Part of my new routine included helping the nurse’s aide bathe Mark. I wasn’t expected to do this, but I wanted to. It was important to me that he knew I was always close by and involved in every aspect of his care. It took two people to slide him from the hospital bed onto the bath bed, which was on wheels. Mark’s naked body was covered in warm blankets. He was secured to the bed with two safety belts, one around his chest and another around his legs, for the ride to the “bath” room. The bed was hoisted into a large bathtub with jets. After nine weeks of sponge baths on his hospital bed, he seemed to enjoy being immersed into the water.

One night in July, after his bath, I cut his hair and shaved his cheeks. We were alone in the bath room. All clean and well-groomed with no place to go except into bed, I stepped back to take one more admiring look at him and said, “I sure do love you!”

Ever so softly, I heard, “Love ya back.” These were his first words in ten weeks and I wasn’t sure I heard them right.

Tears filled my eyes as I moved closer and cupped his cheeks in my hands, “Did you just say love ya back?”

Exhausted, he closed his eyes. Did I imagine this? No, it was real. I felt his jaw move with my hands and he said it three times, looking straight at me. Without another person in the room, there was no witness. Ecstatic, I wanted to shout to the world that Mark had spoken and recognized me, but I feared they’d doubt me. I didn’t want anyone to squash the joy I was feeling, so I chose not to share this grand news—at least not yet. After helping the aide get Mark back into bed and getting the kids from the playroom, I left the hospital elated, keeping this blessed moment to myself for fear no one would believe me.

Excerpts from my article written March 16, 2015, The Roller Coaster

Enthusiastically, I walked down the hallway of Western Rehab. I was anxious to see Mark and wondered what new words he might say to me today. After hearing him say, “Love ya back” and “I love you,” three times the night before, I was hopeful he’d be even more alert this morning. The hallway seemed longer and brighter and I couldn’t get to his room fast enough. I was tempted to run down the hallway as our children often tried to do, but since I wouldn’t allow them, I decided it wouldn’t be appropriate for me to do it either.

To my dismay, I walked into Mark’s room and the nurse told me he had a fever and his heart rate was fast. He had an infection and the doctor was investigating the source. They pulled the catheter from his bladder and replaced it with a condom catheter in hopes the infection would clear up. Mark was totally unresponsive that day. Even when the kids came to visit that night, there wasn’t the usual blinking of his eyes to their yes and no questions.

We thought the intravenous antibiotic must be working because the following day when my mom brought the kids to the hospital for a visit, he was answering some of their questions with the routine blinks of his eyes. When they kissed him good-bye, he surprised each one with a soft, tranquil, “I love you.” Overjoyed by words which are so often taken for granted, the kids skipped out of the room wearing ear to ear grins, each holding Grandma’s hand, while Mark slipped back into his deep sleep. 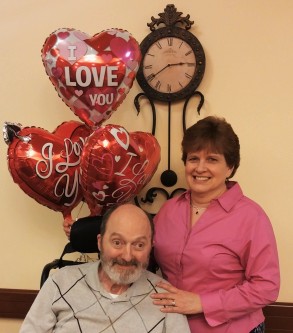 Those three words spoken three times to me and to both of our children two days later were the fuel which got us through Mark’s next fight with phenomena. “I love you” is always wonderful to hear, but we often forget the power behind it.

Three heart-shaped balloons professing “I love you” mean more to me than flowers, chocolate or jewelry. I would appreciate any one of them, but the memory and the recognition that came with the “I love you” said three times with all of Mark’s weakened strength reminds me of the electrifying power it gave me nearly twenty-five years ago. Today is a great day where we are simply and quietly celebrating our commitment to love and marriage.

How do you acknowledge your love on Valentine’s Day?

I look forward to Christine Scott sharing the second part of Laura’s Story on Tuesday.