I met Greg and Laura Nordfelt at the 2013 Brain Injury Conference, just two years after Greg’s motorcycle crash. I’ve enjoyed our friendship and watching this couple get stronger through their traumatic experience. They spoke last week at a combined Survivor and Caregivers Support Group sharing what they’ve learned. 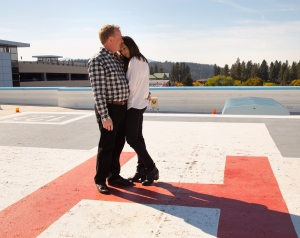 The medical helicopter which came to life-flight Greg was very old and small. In fact, half of his body was in the nose of the aircraft. The ventilator was broken and one of the paramedics was trying to bag Greg (it seemed sporadically) while trying to preform many other tasks. I mentioned to her I was an EMT and asked her if I could do the bagging for her. She agreed and I continued on every 4 seconds like I was trained to do in school. The flight seemed to take forever (I worried we were going to Canada!) and only looked out the window once or twice. When we started to land, all I saw was a “tough shed” structure on top of a roof.  Medical people ran out to get Greg and down an elevator we all went and into the Emergency Department. By the time I felt comfortable enough to leave his side, I asked, “Where are we?” When they told me Coeur d’Alene, ID, I told them I needed to take Greg to Salt Lake City, but the doctor told me he would not survive the flight. I slumped down against the wall and lost it.

I made mistakes. I am fiercely independent and a stubborn woman. In the beginning I turned family and friends away. I said “don’t fly up here, I’m fine”. Then, “we don’t need meals, I’ve got this covered.” Not only did I watch him crash, but I kept him alive for 45 minutes until the paramedics arrived. I was a mess! I had post-traumatic stress disorder (PTSD) and I was in a cocoon as much as Greg was in a coma.

An Executive Vice President from Greg’s work came to the hospital to visit and I cut her off down the hall and visited with her. There’s no way I was going to let her see the condition Greg was in. I was so worried that he was going to lose his job. I posted a sign “Family Only” on Greg’s door at the hospital. Visitors had to check with me or the nurse before entering his room. I took the phone off the wall and put it in a drawer and took his cell phone away from him. He wanted to call his office to “check on things” all the time. I was worried he’d say something inappropriate. 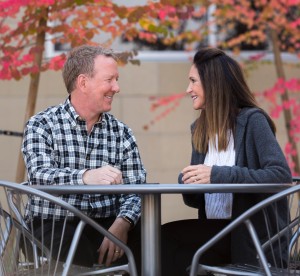 When Greg left the hospital, I sent out a message on Facebook telling our friends that Greg needed time to rehab and recover so if they could wait to visit, that would be much appreciated. I really only meant it for acquaintances, thinking our close friends wouldn’t take it to heart. A few months down the road some dear friends of ours called and asked if they could bring dinner and come for a visit. I was thrilled! Frankly I had wondered why they hadn’t called sooner.

While we were setting up dinner, she told me they would have come sooner, but wanted to respect my wishes of giving us our space. I said, “Oh, I didn’t mean you guys!” I realized then that I had alienated the very people Greg and I needed the most. Greg’s co-workers later expressed the same emotions. If only they’d known what to do. They wanted to help in any way, but we pushed them away.

I own a business and I needed someone to sit with Greg or run him to therapy appointments, but I said “NO, I’m fine”. I really wasn’t fine, but I wanted to be and I didn’t know how to let them help. Most of it was my fault, but some of it was not.  Caregivers leave the hospital with their tool bags pretty much empty. I had to earn my hammer, saw and screwdriver the hard way. I felt neglected, isolated, abandoned, ignored, lonely, unsupported, disrespected and misunderstood. When I needed family and friends the most, they were all gone.

In order to heal, I had to get outside of myself. I started the first ever Caregiver Group in Utah as a survival mechanism. As much as I wanted to give back to the community, I needed other caregivers. As I spent time listening to their stories, I felt not so overcome by my own problems. I felt empathy and compassion. When “in the moment” of caring for caregivers and survivors, their hurdles felt more important than my own. When we get caught up in these “feel good” experiences, we don’t need anything in return. I also joined the Board of the Brain Injury Alliance of Utah. This is my passion now!

Another way I healed is a couple of years ago a friend asked me to join her book club. I love to read, but I was scared at first because I only knew her and no one else. I went one time and almost did not go back, but forced myself to hang in there. These women are now very near and dear to my heart. I’ve read many wonderful books which I never would have picked up on my own. The social setting has its benefits as well. We trade off hosting dinner so I’m learning new recipes. I work on my listening skills and forget my problems for a few hours. By the very nature of getting together with women, it forces me to get out of my pajamas. Therefore, I get semi-dressed up, put on my makeup and lipstick and wear my fun jewelry. All of this is very good for my soul!

Thank you, Laura, for sharing your experiences and what you’ve learned. Friedrich Nietzsche was right, “That which does not kill us makes us stronger.”  I see that in Greg and Laura’s life and hope you see that truth in your own life.

2 thoughts on “What Doesn’t Kill Us Makes Us Stronger, Part 2”