So grateful for our daughter Katie, who takes her dad shopping every year for my Christmas, Mother’s Day and birthday gifts. She has done this faithfully ever since she’s had her drivers license — and since she’s been married, her husband, Eldin joins her. When Katie was a little girl, Mark took her shopping for my gifts. We didn’t realize she would be continuing the tradition, when at age sixteen she started taking Mark shopping for my gifts. What a sweet and thoughtful daughter we have. We are so grateful for Katie and Eldin!

It has snowed all day today. So blessed to have wonderful neighbors who shoveled my walks and driveway. I am so fortunate to live on this street. I love my neighbors!

Christmas can be a magical time, when wishes are granted. This was definitely the case for Mark and I twenty-two years ago. After eight months of hospitalization, I was finally able to bring Mark home —  just in time for Christmas. He was far from better and still needed extensive therapy and care, so I worked on establishing a “day- patient” schedule where he’d be there all day for therapy and I’d be able to care for him every night at home. At the time he wasn’t able to feed himself or take care of any personal needs. Mark’s doctor, Joseph Vickroy, and the rehab team of speech, occupational and physical therapist, requested that we spend several nights in an apartment-like room located in the center unit where Mark had been for six months. They felt it was important for me to understand the responsibility of caring for Mark before they released him.

I thought the suggestion was trivial since I had spent every day with him and fed him most meals anyway; however, I understood their concern and agreed to do it. I spent several nights there and took complete responsibility for him. Our two children also spent a few nights there to understand what life would be like to have Dad at home.

Once we realized Mark was going to be wheelchair dependent, we knew some home modifications would be necessary. In October 1991, we started building a large room which would become our bedroom with a wheelchair accessible bathroom off the back of the house. Fortunately, my dad and brothers work in construction and they were willing to do the job. My oldest brother, Mick, designed the addition with a ramp for the new back entrance. If you’re blessed to have a father who is an excavating contractor, “you can’t add a room without a basement.” 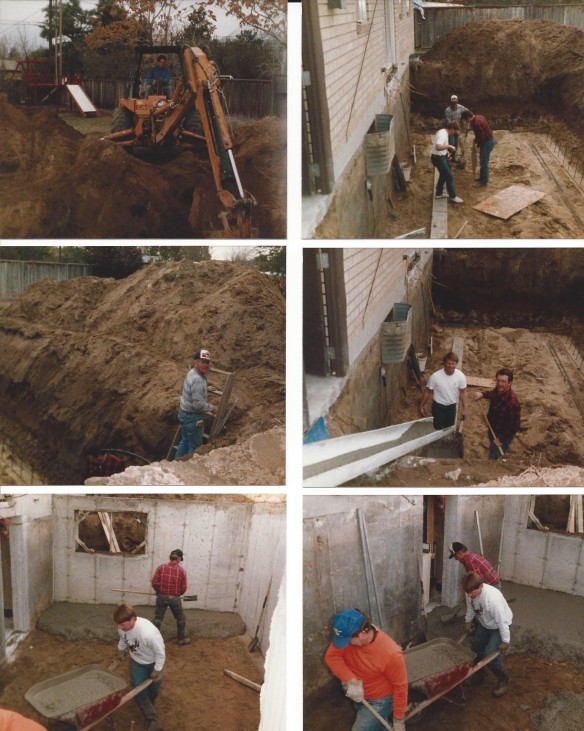 Because they were building this addition on their own time after work, it was not completed in December. Despite the unfinished construction we wanted Mark home for Christmas. Mark’s care was physically difficult until the new bedroom and bathroom were finished, but well-worth all the effort to have him finally home. Our regular bedroom wasn’t big enough for all the equipment now needed for Mark. Our queen-sized bed had to be replaced with a single-sized hospital bed. At night, after I transferred him into bed, I would raise it as high as it could go and place my air mattress on the floor in the only space available — which meant my legs were tucked under the bed. Worried that Mark might forget I was there and use the controls to lower it, I would unplug the bed every night.

This sleeping arrangement made for many jokes. I often said as I unplugged the bed, “You are now out of control.” He teasingly replied, “But, I’ve got the top.”

Our living quarters were cramped and hard with the construction going on, but it was so worthwhile. My heart is filled with gratitude for my dad and brothers who made our home so much better for our new circumstances. Our trials were lightened by their skills and hard work.

After nine months of living in a hospital — it truly was the merriest of Christmas’s to have Mark finally home.