When I was a child, I saw a few episodes of “The Joy of Painting,” featuring the famous landscape artist, Bob Ross. I thought the skinny white painter looked funny with his big brown Afro. His thick beard barely moved as he softly spoke about the different techniques and tools he used to paint. His serene ponds and lakes mirrored colorful trees and majestic mountains textured with highlights and shadows.

Just when his paintings seemed perfect, he’d slap dark paint down his canvas. “No!” I’d holler in my head. “What are you thinking?” He disturbed the tranquility he’d just created with what seemed like an ugly mistake. He added highlights to the dark line, creating the texture of bark. He pushed his brush loaded with green paint against his canvas, creating speckles of leaves. He gradually turned the dark line into what he called a “happy little tree.” He transformed his canvas with a new kind of beauty.

I don’t think life is ever picture perfect for anyone, but my early childhood was close. I grew up with two loving parents and a brother 16 months older than me. I was blessed with a healthy body and a comfortable home. 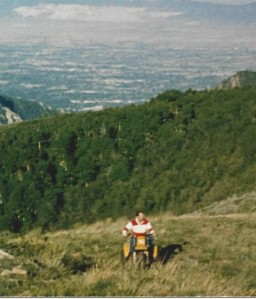 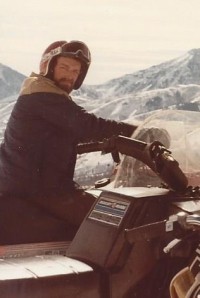 The four of us loved dancing, biking, hiking, snowmobiling and three-wheeling. My dad was my favorite person to ride with on the snowmobiles and three-wheelers. He drove fast and took jumps even with his little girl’s arms squeezing his waist as she squealed behind him.

The canvas of my childhood was transformed almost two weeks after my seventh birthday. My cousin was babysitting my brother and I while my parents were house hunting. The phone rang. When I got on the phone, I heard my mom’s voice crack. I could envision her chin quivering as it does whenever she starts to cry. “Your daddy’s hurt,” she said.

I learned my parents were in a car accident. I didn’t know the extent of my dad’s Traumatic Brain Injury at that time. But if my mom was scared enough to cry, then so was I. I cried a lot that night.

Days later, my mom sat at the kitchen table with the two of us kids. Her right arm was in a sling. She had my brother make a paper origami-like box, something he’d recently learned in school. She explained how a pickup truck hit our family’s small Hyundai on the passenger’s side where my dad was sitting. She pushed in one side of the paper box as if it were a replica of the damaged car. She explained the impact of the accident pushed the car across the intersection and into a light pole. She pushed in the other side of the paper box, indicating how the pole smashed the driver’s side of the car, just behind the driver’s seat where my mom was sitting. The impact caused my dad’s head to hit the inside frame of the window and then swing to his left and hit my mom’s right shoulder, shattering the right side of her collar bone.

I later asked my mom if the man driving the pickup truck was in jail for hurting my dad. She explained the accident was a mistake. Nobody meant to hurt him. All I knew was my dad was in a hospital instead of home with his family. I thought someone should be punished for that.

I didn’t get to see my dad for the first six weeks he was in the Intensive Care Unit because my mom thought it would be too scary for her little kids. That was a wise decision. He lay comatose in a rotating bed. He was hooked up to tubes and machines, which made unusual noises. One of those tubes was a shunt in his head to relieve fluid on his brain – something no child wants to see.

My mom decided it was time for us to see our dad after his condition became more stable and the shunt in his head was removed. He was still comatose, but I was excited to finally see him. My excitement shattered when I walked into his room. The man I once saw smash his finger with a hammer without shedding a tear lay helplessly unconscious. Tubes connected his lifeless body to machines. He was dependent on technology and the care of others. It was my first time seeing him vulnerable.

I was scared. I recognized his face, but how could he be my dad? My dad was strong enough to lift me onto his shoulders so I could see parades over large crowds. My dad did sit-ups every night with his toes tucked under the couch as I sat on it and counted his sit-ups aloud. My dad killed spiders for me and read bedtime stories to me. I didn’t want to go near the lifeless body in the hospital bed. 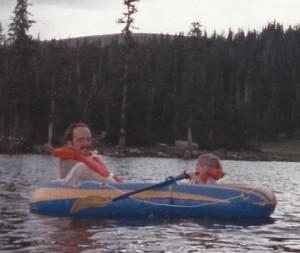 That night, my brother and I slept at my grandparents’ house like we often did after my parents’ car accident because Mom stayed at the hospital. My grandma prepared the sofa pullout bed and tucked us in under the covers. Instead of singing us lullabies, she quietly played the piano on the other side of the room. I slipped into         dreamland.

I dreamt I was sitting in the same bed I had fallen asleep in while wearing the same pajamas. My brother was sleeping to my right. When I looked to my left, I saw my dad standing – yes, standing – at my bedside! He looked tall and handsome in his Sunday suit. He didn’t say a word to me, but his warm smile soothed my fears and I was no longer afraid of him.

My dad was in a coma for three months and hospitalized for eight. He came home just in time for our family to spend Christmas together. He was in a wheelchair and dependent on my mom’s care. 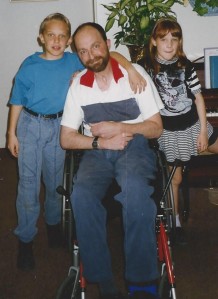 While growing up, some friends asked me what it was like having a dad in a wheelchair. My brother and I helped my mom dress and care for my dad, especially when he first came home from the hospital. I learned how to help around the house and be more independent at a younger age compared to most of my friends. Our family could no longer dance, bike, hike and snowmobile together like we once could.

The scene of my life drastically changed, and so had my dad’s. But like Bob Ross transforming a dark and ugly line of paint into a “happy little tree,” I saw my dad use his tragic and life-changing disturbance to create a new kind of beauty.

He taught me the value of perseverance as he pushed through strenuous therapy. He learned to feed himself and speak again. He liked to say P.T. (physical therapy) really stood for “pain and torture.”

He showed me how burdens can be lightened by having a sense of humor. He often told people the scar on his stomach from the feeding tube he had was really a second bellybutton, which made him “twice the man.”

My dad (who wasn’t expected to live) not only survived, but thrives with a positive attitude. I’m blessed to call him Dad.

Next week, I’ll share how this transformation affected my life throughout my teen years and as an adult.

Thank you Katie for sharing your story. You and Christopher have been our inspiration. Your encouragement and love kept us striving to do better and to never give up. While searching for the pictures to use, my “chin was quivering, just as it does whenever I start to cry.” My heart truly broke the day the accident happened. Not only for your dad but for you and Christopher too, but as you so elegantly reminded me—it’s a beautiful heartbreak. I’m so blessed and proud to be your mother!

HAPPY FATHER’S DAY TO ALL THE GREAT DADS! I’m lucky to have one and to be married to another. I’m grateful for all the men in my life.