Mark and I with Ron Roskos, who received the Lifetime Achievement Award.

Over twenty years ago I was introduced to Ron Roskos, then president of the Brain Injury Alliance of Utah, a non-profit organization. The group helps community members affected by brain injury by providing resources and information to survivors and their families. They also educate the community on preventing brain injuries. They have an annual conference every fall which brings together healthcare providers, educators, families and survivors. We appreciate the information given at the conference and enjoy seeing therapist and nurses who have worked with Mark in the past. It also appears to give them pleasure to see the progress Mark has made over the years. 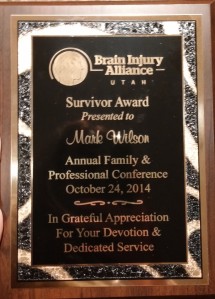 During the conference lunch they award five individuals in the following categories: Survivor, Family Member, Healthcare Provider, Educator and Lifetime Achievement. Mark was nominated for the Survivor award and we were thrilled to see him receive it. A month ago I was informed Mark was the chosen nominee and they wanted it to be a surprise for him. It was hard to keep the secret as I prepared for the celebration. I believe Mark’s survivorship has been based on the support of family and invited them to join us at the luncheon. Since Mark’s mother and sisters live out of state, it took more planning and time on their part to attend. Mark’s mom flew in from Washington to be at the luncheon and his sister, Karen, and brother-in-law, Mark Ray, flew in later that evening to celebrate with us. It made for a wonderful and memorable day. Our daughter, Katie, and I wrote the following introduction, which the presenter read when announcing Mark’s award. Mark Wilson survived a Traumatic Brain Injury due to a car accident he was in with his wife, Barbara, in 1991. He was comatose for three months and hospitalized for eight months. He is wheelchair dependent and struggles with memory and epilepsy. What a great example he is, especially to his wife and two children, who were ages seven and eight at the time of the car accident. Mark demonstrates the value of perseverance as he pushes through strenuous therapy relearning to speak, write and regaining the ability to feed himself. His ultimate goal is to walk and after twenty-three years he remains hopeful. With the assistance of a walker, his wife at one side of him and a friend at the other, he practices walking at least twice a week with determination. He’ll often look at the two people assisting him and jokingly say, “This is really hard. Must I drag you both along?” He shows burdens can be lightened and joy can be spread with a sense of humor. He enjoys making others laugh with what we call “Markisms,” like telling others that the scar on his stomach from the feeding tube he had is really a second bellybutton, which makes him “twice the man.” Despite many obstacles, he chooses to be happy by looking for the positive in every situation. He is forgiving and thoughtful towards others. Mark is patient and never demanding. He enjoys being productive and looks for ways he can help. He expresses gratitude often for what he has and for the help he is given. Mark once said, “Adversity is the exercise that strengthens the muscle of character.” His muscle of character has Hercules’ strength. He’s more than a survivor – he’s a THRIVER!

Mark and I with Mark Fox, the award presenter.

I’m so proud of Mark and believe he deserves the award for the way he cheerfully handles his difficult, unexpected, unwanted and painful life. I’m blessed to be his wife and caregiver. I loved what the presenter, Mark Fox, said after handing Mark the plaque. “I have to put in a side note…I was relatively new in my career back at the time Mark had his accident and was working in rehabilitation at what is now called HealthSouth,but was then Western Rehabilitation. Mark was at the center for a long time. He had speech impairment and you really couldn’t understand anything he said. Being a young clinician and seeing how hard they work for a long time in rehabilitation with limited progress in speech intelligibility, I really didn’t believe he could ever be verbally understood. But he was always determined. Several years later I saw him at the community rec center. They were doing exercises in the pool and he said, ‘hi’ to me. I about fell over. He was so clear. So, if you get an opportunity, I strongly encourage you to have a conversation with Mark. He is a wonderful man with a wonderful family.” In looking back, I was naively optimistic about Mark regaining all his abilities, but the determination and hard work has paid off. I’m grateful for Mark Fox’s statement recognizing his continued improvement even after his rehabilitation. Gratefully, Mark has never given up and a professional healthcare provider acknowledged it. There are only a few people who have been with us from the beginning of Mark’s traumatic brain injury and they are the only ones who can fully realize and appreciate how far Mark has come. We love to surprise them and see their joy in what he has accomplished. Life can be challenging. We don’t expect it will get any easier as we age, but it’s rewarding to overcome hardships. I’m grateful for organizations like the Brain Injury Alliance of Utah which provides support, education and shows us we’re not alone in our journey. 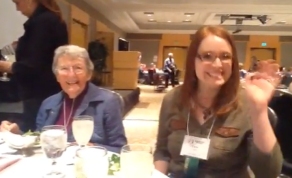 Eldin with Steve in the background. 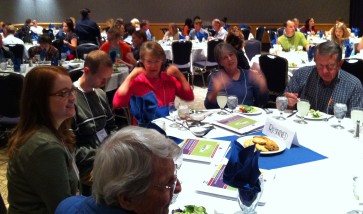 Missing picture of Ruth and Steve who were also there, but sitting at a different table. Don, Klint, Jerrie and Jon were unable to attend due to work. We also missed our son, Christopher, who wasn’t there due to new employment which has taken him to Washington to live:-( We love and appreciate our family and their support!

Enjoying treats and our visit  at Sundance 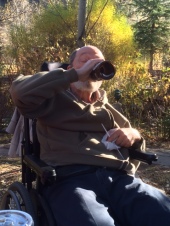 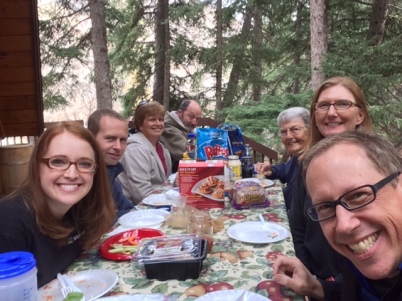