My name is Christine Scott. I’m a forty-six-year-old mother of five children and I grew up with a mentally disabled sister. In my first segment of Laura’s Story, I recounted her birth and slow development. Processing the memories and spending time reminiscing with my mother about my sister’s life is exactly what I needed—and my mom too.

In 1970 with only a few days left until Christmas,  my mom loaded Laura (three years old), and me (eighteen months) into the car and made the hour commute from Morgan to Salt Lake. Laura had been running a slight fever, which wasn’t out of the ordinary. Ear infections and sicknesses had become a common occurrence. Once in Salt Lake, she left us in the care of my grandparents so she could go Christmas shopping with Aunt Jean—my mom’s younger sister.

Enjoying the anticipation of the holidays, my mom and Aunt Jean began their shopping trip. While inside their first store, my mom heard her name over the store’s intercom. Since this was during the time before cell phones, it’s easy to imagine the anxiety which must have overtaken her at that moment. She doesn’t remember exactly what the store’s employee said, but easily recalls the anxiety-filled trip to the hospital where Laura lay unconscious.

This was Laura’s first seizure. She did not convulse, like one typically assumes happens during a seizure, but passed out and stayed unconscious for twenty minutes or more. At the hospital they administered phenobarbital, an anti-seizure medication and later antibiotics after diagnosing strep throat.

It’s hard for Mom to remember the timeline and the events which happened so many years ago and unfortunately she didn’t keep records. I remember as a child feeling very disappointed when we left the swimming pool or a playground early or didn’t get to go at all because certain activities seemed to induce seizures. This is when I began to figure out Laura was different from other children, which was beginning to make me different as well.

My mom took Laura to Primary Children’s Hospital for multiple evaluations. Laura most likely had started school during this process and was exhibiting some behavior problems. The doctors ran tests and put her on Ritalin. My assumption is that the Ritalin was introduced to help her in the classroom. Laura started having grand mal  seizures and mom directly blamed the progression of her seizures on the Ritalin. 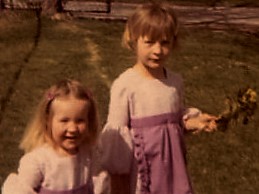 Life went on and Mom did her best to provide a good life for us while dealing with the challenges placed before her. Living in the small town of Morgan, Utah, the elementary school was not equipped to handle Laura’s disability. Since Laura couldn’t function in the classroom, she only attended school a few times a week for a couple of hours. Dissatisfied with the services Laura was receiving, my mom chose to drive twenty-five minutes to Ogden Weber, a special education school. This is where Mom finally began to receive the support she needed for my sister. She was hired on at the school as a teacher’s aide and joined a community of individuals who cared for children with disabilities. When I look back on this time, I remember the happiness and peace my mom experienced. With the money she earned she was able to buy a more dependable car and a dishwasher. When I recently asked her about the time she worked at Ogden Weber, she said, “I learned so much.” The people she worked with respected and treated her as an equal—which I believe made a huge difference in how she felt about herself.

Since Mom worked outside the home and had to leave early in the morning, my care fell to my dad. Luckily at this time I was a first grader and attended school all day. Dad owned his own business where he designed and built hang gliders. I left early with Dad and stayed at his shop until it was time to catch the bus. These were cold and lonely mornings for me. A wood stove made out of a half metal barrel heated his drafty work area. I stood so close to the stove to keep warm that it melted the fake fur which trimmed my coat, forming ugly burned clumps. Mom trimmed them off the best she could since we didn’t have enough money to buy a new coat.

Another memory I have of Dad’s workshop is when I had the measles. For two weeks I laid in a makeshift bed up in the loft of his shop while I recovered. I missed my warm home and my mother’s care. Looking back, this is when my detachment from my mother began, when I started making myself small in order for our family to survive.

Life goes on and we do our best to work through the challenges placed before us. Medication controlled Laura’s seizures and my mom continued to work at Ogden Weber. At Laura’s young age of nine a suspicious lump on the side of her neck stopped responding to antibiotics and was diagnosed as Hodgkin lymphoma. My quiet, stalwart Uncle Bob was diagnosed with cancer along with my cousin, Rick. After a commendable fight, Bob recovered and returned to work, but my cousin didn’t. He died of Hodgkin lymphoma.

At the time, I was unaware of all the hardships my mom faced and my heart goes out to her as I think of the superhuman strength it took to face another new challenge. She had already overcome so much. I will always be thankful for the example she set as she showed me what it means to be strong in the face of adversity and to not give up no matter how hard life gets.

Thank you Christine for sharing your sister’s story. I appreciate getting a child’s perspective on the caregiving of a close sister and realizing how a healthy child could be overshadowed by the concerns of health and financial worries. It’s amazing  the variety of challenges Laura endured and reminds me that no person is an island. What happens to one affects every member of the family. I look forward to your next segment.